We have certainly heard a lot about Medicare For All, the principal healthcare theme being “debated” during the current political primary season. A number of candidates have followed Bernie Sander’s call for Medicare For All.  He loves to shout that the United States is the only developed country in the industrial world that doesn’t provide universal health coverage. Other candidates have jumped on his bandwagon 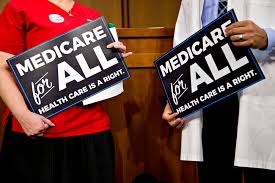 and have faithfully adopted his stance. While the promise of universal coverage is appealing as a political platitude, the question should be “how do we realize that lofty goal?” At Wilkinson Benefit Consultants (www.wbcbaltimore.com), we have studied these options at great length.

In my book, Killing Healthcare, I discuss the pros and cons of this type of system. I refer to it as “Medicare Part E” as in, Medicare For Everyone. What Senator Sanders’ and others who support a single-payer system either forgets to say, doesn’t know to say, or ignores by not saying, is that the only healthcare system that can work in the U.S. without changing the access we currently enjoy and quality that we expect, is a multi-payer system.  Why, some dear readers may ask? That is because our U.S. healthcare system is built on capitalism and capitalism is built on buying low and selling high.  Let’s translate to U.S. healthcare: in our system, providers of healthcare services have to act like Willie Sutton (younger readers go to Google and look it up) and go where the money is, i.e., they have to find payers willing to pay their price, in order to maintain the margins they need to satisfy themselves and/or Wall Street shareholders.  They accomplish this by having some payers (Commercial) subsidize the price that the provider/vendor must charge in order to pass regulatory scrutiny (Medicare & Medicaid). We see it all the time in hospital charges, out-patient radiology and pharmaceuticals, to name a few. Yet, providers can’t always sell high. Competition and/or government regulation dictates how many of the transactions are covered and reimbursed.  A provider can only manage this pricing model when there are multiple payers that want to play. By eliminating alternative payers via a single-payer model, the shell game collapses!

All righty then, let’s get rid of the for-profit motive and let the government handle payments, some may argue. We can make all healthcare service providers non-profits and all payments/reimbursements come from the Centers for Medicare and Medicaid Services (“CMS”). That is one option, but then we find ourselves in a changed services environment regarding access and quality, and most would say, changed in a negative way. Without cost-shifting to a higher reimbursement payer, everyone in the healthcare eco-system must be willing to get by or get out. No question that some will adapt and learn to live with reduced payments. However, there will almost assuredly be a number of private practices, hospitals, specialized outpatient surgical centers and diagnostic facilities that will wind up reducing staffs, reducing services, or closing-up shop altogether.  For patients, this means longer wait times and reduced choices. As we saw with the Obamacare attempt at misnamed “reform,” patients could not keep their insurance plans or their doctors! Quality will also suffer.  Without the availability of premium pricing, facilities will not invest in the latest technologies or greatest talent and pharmaceutical manufacturers will not develop the latest therapeutics. All of these downsides come in addition to an unsustainable cost associated with a Medicare For All arrangement.  Some estimates are as high as $60 trillion over 10 years! Most of us can’t put that number into perspective, but to give it a shot, if the government confiscated 100% of all of the U.S. billionaires wealth to help pay for this proposal, they’d only come up with a one-time windfall of about  $3 trillion.  The rest would have to come from us, the U.S. taxpayers. Since we “only” collect about $3.4 trillion currently, taxes would have to approximately double and be paid at that level for every year to meet this obligation. By the way, that means every red cent would go to Medicare-for-All. There would be nothing left for any other government agency or program!  That means no military. No infrastructure improvements. No education subsidies. No food stamps, etc. Since uninsured still remains about 15% of the population, we think there are other methods of providing coverage while maintaining our present system.

Some may conclude that adopting a Medicare For All model is a worthwhile trade-off. Some say that there would be huge administrative savings by having the government as the single payer and it would offset the negatives (we have examined a number of studies and have not seen conclusive evidence). What is being proposed is less freedom and more expense in exchange for universal coverage. Maybe? But we believe that in order to adequately discuss the topic, all features, benefits, liabilities and costs must be considered before making a decision.

Stay tuned. The healthcare topic will only escalate as we get closer to the November election.