Happy Birthday Medicare and Medicaid.  It’s been 50 years since President Lyndon Johnson signed the bills into law, and my, how they have grown! 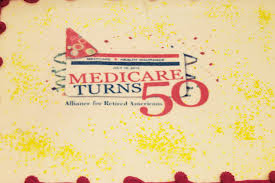 Currently, 35% of all U.S. residents receive their healthcare through these programs and $4 out of  every $10 spent on healthcare dollars channel through  Uncle Sam. (These numbers will continue to explode as the newly ACA-empowered Medicaid expansion continues to swell the ranks.) In fact, as I point out in my new book, Killing Healthcare (https://wbcbaltimore.com/books/) as a society, we are headed toward Medicare Part E (that’s “E” as in “Everyone”).

Original Medicare and Medicaid have expanded dramatically over the years. The addition of Medicare Part D in 2006 and the Affordable Care Act in 2010 have done little to address the bombastic price tag associated with these programs.  (We’re looking at about $1 trillion annually and growing!)  I fondly recall the Medicare Part D debate in 2003. Mr. Bush’s healthcare gurus packaged the idea of the “doughnut hole” as a cost-sharing mechanism with participants in order to keep the price tag below $400 million, which was considered the magic cost threshold in order to get the deal. What a quaint concept!

The equation is quite simple: 100 million people or so, give or take (and growing), times $10k per year (and growing) per belly button and voila! A budget busting, healthcare souffle that is headed for an oven-door slamming, deflating cost disruption! In other words, we can’t have a growing U.S. population dependent on government healthcare, with an unquenchable thirst for healthcare services and expect anything but rationing, restricted networks and provider access delays. Oh, and have I mentioned taxes (or Treasuries financed by The People’s Republic of China)?

But Washington has been brain dead when it comes to entitlement spending or anything close to entitlement reform. It’s always easier to defer to the next Congress or next Administration, and even then, few politicians have the appetite for such impolite dinner conversation. Some financially savvy folks are speaking up.  Alan Greenspan, former Fed chairman calls the extraordinary rise in entitlements “extremely dangerous.” Social expenditures were 19.2% of GDP in 2014, up from 15.5% in 2005.  GDP books are being cooked so that an anemic growth rate of 2.3% annually during the 2nd quarter can be presented which is supposed to be greeted as encouraging! Healthcare expenditures will continue to gobble up a bigger and bigger chunk of GDP until something can be done to cure the jobs malaise infecting the country. Keep in mind that the Fed has kept interest rates at close to zero for almost a decade, saying that it will raise rates only when they see a sustained recovery.  Happy Birthday indeed!